Event Handler is a service that allows you to build automations that react to different SIM events. An event handler consists of a rule and one or more actions, which can be freely combined to fit a variety of situations, as well as variables which can be used to customize certain actions.

Event Handler has been updated and now supports the following additional rules, actions, and variables:

New Rule: Match when a SIM status is changed to Standby

This gives you finer control over your devices, such as running different actions when a SIM changes from Ready to Active, than when it changes from Inactive to Active.

You can now choose to suspend a SIM (change its status to Suspended) as an action to perform when an Event Handler's rule is matched.

For more information, please refer to the Event Handler documentation.

With this update, when your device looks up the domain name specified by the connection endpoint, both IPv4 (A record) and IPv6 (AAAA record) addresses will be returned:

Your device can then use the IPv6 address to connect to Soracom.

In order for your device to connect using IPv6, both the device itself and all network elements between the device and Soracom must support IPv6. For example, if your device is connected via Wi-Fi to a router, the router must support IPv6 networking, and your Internet Service Provider must also provide you with an IPv6 address.

If you are using the soratun tool to configure and manage the SORACOM Arc connections on your device, you will also need to upgrade soratun to version 1.1.0 or later. You can check which version is currently installed by running soratun version. 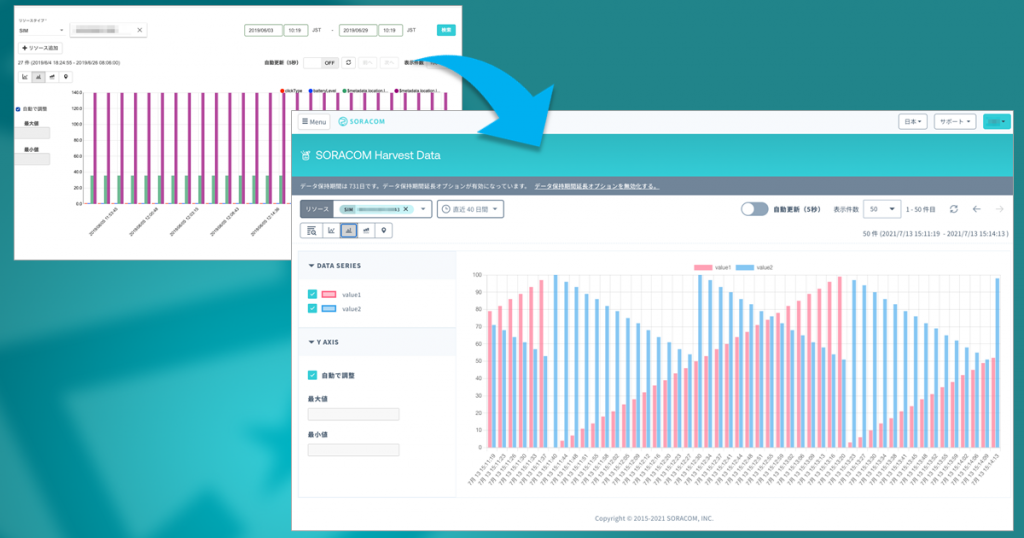 SORACOM Harvest is a data collection and storage service that allows you to easily capture and save data from devices without the need to set up and configure servers or other cloud services.

Soracom is pleased to announce updates to the Harvest Data interface on the SORACOM User Console, to help make accessing and visualizing data more intuitive.

The Harvest Data interface layout has been improved to make accessing the following features easier:

The Harvest Data interface now provides quick shortcuts for specifying a time range for the shown data, such as "Last 1 hour," "Last 7 days," or "All Time." 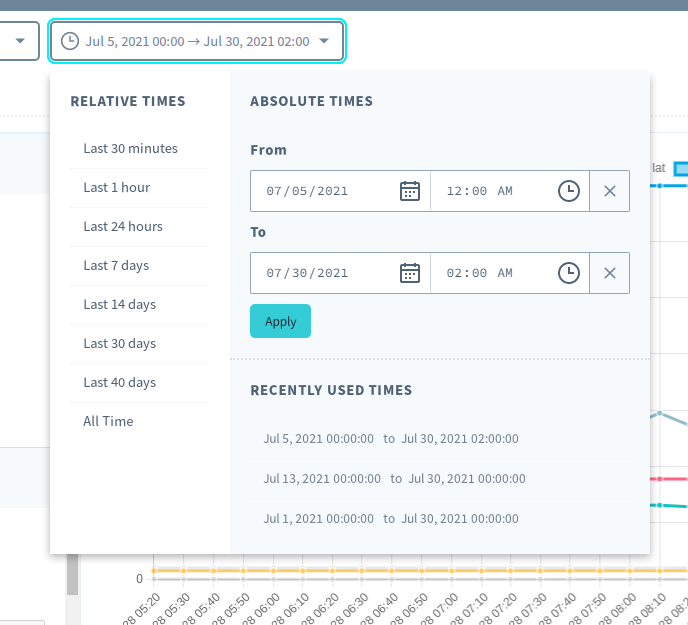 When changing the time range, the User Console will now also dynamically update the URL to match the specified time range. You can use this to save a link and easily return to the same view later.

When using SORACOM Funnel to send data from a device to a cloud service, Funnel will now preserve decimal value notation when the fractional part of a decimal value contains all 0s.

Note that if the value contains more than one trailing 0 in the fractional part of the decimal, only the first 0 will be preserved. For example, if a device sends data {"temperature": 20.00}, Funnel will send the data as {"temperature": 20.0} to the cloud service.

Please be aware that if your cloud service is configured to check the presence or absence of a decimal point . in order to determine the data type (decimal or integer), this change will affect the behavior of the cloud service.

Type-C Virtual Private Gateways (VPG) will be deprecated on July 31, 2021. After this date, you will no longer be able to create a Type-C VPG.

Customers with existing Type-C VPGs may continue using their Type-C VPGs without interruption. However, please note that some VPG features such as SORACOM Peek packet capture are only available with newer Type-E and Type-F VPGs.

As you will no longer be able to create Type-C VPGs, you may use one of the following alternatives:

For more information on the differences between each VPG type, refer to the following pages:

The Amazon Kinesis Video Stream adapter for SORACOM Funnel, previously offered on a Limited Preview basis, will be discontinued on July 31, 2021.

Announcement
a year ago

The plan-D subscription is available with Data-only and Data/SMS options. For plan-D (Data-only) subscriptions, the main differences between the original subscription and the new D-300MB bundle are as follows:

The D-300MB bundle is also available for plan-D (Data/SMS) SIMs, with similar differences in pricing.

You can start using the plan-D D-300MB bundle in the following ways:

You can purchase a new plan-D D-300MB SIM from the SORACOM User Console. Simply switch to the Japan Coverage type, create a new order, and select the "SORACOM Air SIM card plan-D (D-300MB)" item. You can choose between Data-only and Data/SMS options, as well as the SIM card size you want to use.

For more instructions on creating an order, please refer to the Order Management: Placing a New Order instructions.

You can also purchase a new plan-D D-300MB SIM from the Soracom IoT Store (Japan) (in Japanese).

The search functionality in the SIM Management screen of the User Console has been improved. In addition to searching by SIM name, tag, and group, you can also filter search results by SIM status, the type of subscription, and even the type of module, all from a single search interface. 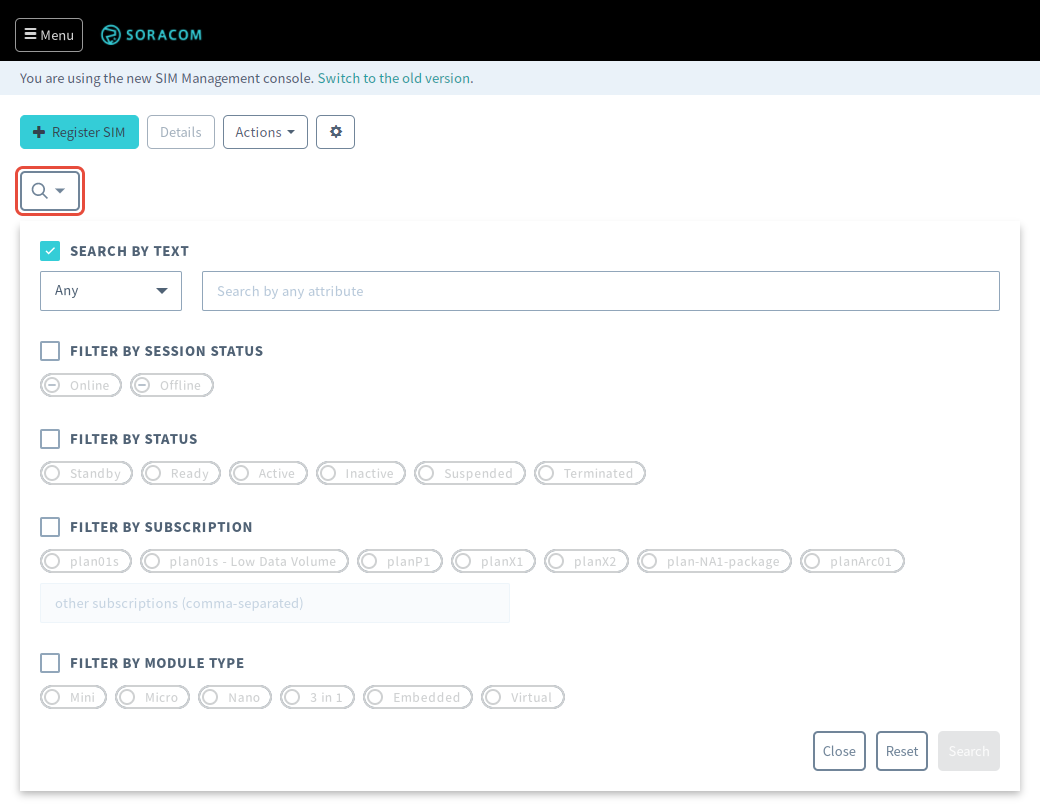 For more information, please refer to the following pages (in Japanese):

When using the MQTT entry point to forward an MQTT connection from a device to a destination MQTT broker, you are currently able to select between two Soracom platform versions: 201912 and 201509. Soracom will end support for the 201509 version on January 20, 2022.

For more information about differences between the 201912 and 201509 versions, refer to the SORACOM Beam: MQTT Entry Point documentation.

If you are currently using the 201509 version in your Beam MQTT Entry Point configuration, please note that any configurations that still use version 201509 will automatically be switched to version 201912 on January 20, 2022, once support for the previous version has ended. Depending on the configuration of the MQTT client on your device, your device may no longer be able to connect to the destination MQTT broker in order to send or receive data once this change occurs.

Please carefully review the details in the SORACOM Beam: MQTT Entry Point documentation for information on how to update your device settings and migrate your Beam configuration to version 201912 in advance, in order to avoid interruption.