We are excited to release the S+ Camera WP v2.1, the latest in the S+ Camera series of edge AI cameras, which is suitable for installations in outdoor environments.

S+ Camera WP was previously available as a Limited Preview to a limited number of customers. Based on customer feedback, the updated S+ Camera WP v2.1 now features improved waterproof and dustproof performance. 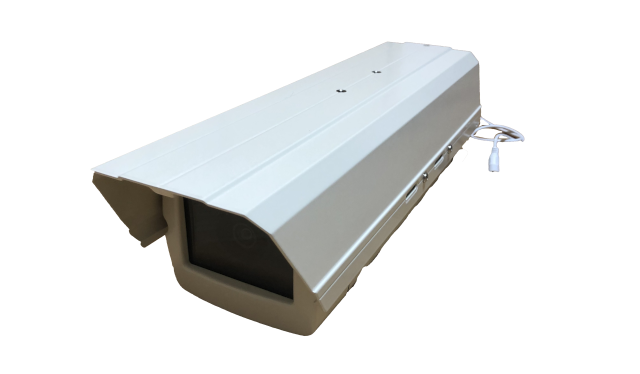 Please note that with this release of the S+ Camera WP v2.1, S+ Camera WP (Limited Preview) (Japanese) will be discontinued.

Soracom is pleased to announce the launch of planX3, a new global subscription plan with 2G, 3G, and 4G/LTE coverage in 89 countries and regions. planX3 also supports LTE-M (LTE Cat-M1) connectivity in 12 countries, including Japan, Germany, France, and the United States. 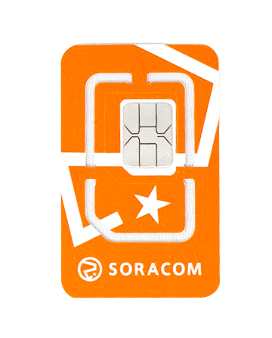 planX3 also features a simplified subscription price of USD $1/month, which includes 5 MiB of data traffic each month, making it ideal for small data volume applications. Pricing for additional data usage in excess of 5 MiB ranges from $0.073/MiB in Japan and APAC, to $0.037/MiB in the United States, and $0.02/MiB in major European countries.

At this time, planX3 is only available to customers located in Japan. If you are located outside of Japan and are interested in purchasing planX3, please contact us.

For customers located in Japan, planX3 SIMs can be purchased from the SORACOM IoT SIM Card Type (planX3) (Japanese) product page. You can also purchase planX3 SIMs from the User Console (Japanese).

Soracom provides a command line tool soratun that can be embedded in a device in order to easily set up and connect to the Soracom platform using Soracom Arc.

Until now, when bootstrapping a device using soratun, credentials for connecting to Soracom Arc needed to be stored in a configuration file in the device's local file system, such as arc.json, which soratun can then subsequently use to connect to Soracom Arc.

With this update, you can now pass the configuration obtained from the bootstrap process directly into soratun in order to connect to Soracom Arc without storing a credential file.

This update adds the following options:

With these two options, you can now pass the configuration directly in the following way:

In addition, the following options have also been added so that optional configuration parameters can be specified together with soratun up --read-stdin:

The existing soratun bootstrap command can still be used while storing the configuration locally.

Package20™ (Japanese), a set of 20 image recognition algorithms for S+ Camera series which was previously provided free of charge for a limited time, is now available at the regular price of ¥9,800 (tax included). Package20™ can be purchased from the S+ AI Market in the SORACOM Mosaic Console.

Note: SORACOM Endorse (Japanese) is required to verify the installation of third party algorithms on S+ Cameras. Please refer to the above document for instructions on enabling Endorse.

Announcement
a year ago

We are pleased to announce that Soracom Air IoT SIMs are now available in a commercial grade embedded SIM version.

The existing industrial grade embedded SIM will still be available for purchase, and will now be sold under the new product name SORACOM Air Embedded SIM Industrial Grade, with product code SGEIL01.

AnnouncementEnd of Support
a year ago

As announced in July 2021, the Soracom Beam MQTT Entry Point platform version 201509 was scheduled to be discontinued on January 20, 2022, with any Beam MQTT configurations still using this version to be migrated to the newer version 201912.

However, during the process of migrating existing Soracom Beam MQTT Entry Point configurations, a number of customers reported unexpected communication instability with version 201509. As a result, we have decided to temporarily postpone the discontinuation and to amend our support policy for this version.

If you have any questions about the impact of these changes on your devices, please contact our support team at your earliest convenience.

We are excited to announce that Binary Parser, a feature for Soracom Air devices that converts binary data into JSON, now supports MessagePack (hereafter MsgPack).

In many applications, a device may be configured to send data to a server or to the cloud using JSON format, often for compatibility with cloud services or simply to make the data easier to work with. However, sending data using JSON results in relatively high data usage due to JSON syntax requirements. MsgPack is a binary serialization format which allows a device to easily compress JSON data before it is sent, effectively reducing data usage.

Once data has been compressed and sent, it needs to be converted back to its original format so that a server or cloud service can understand it. With this update, you can now configure Binary Parser to convert MsgPack-compressed data back to JSON by simply entering @msgpack in the Binary Parser format setting. From there, the original JSON data can be sent to Soracom Harvest for storage and data visualization, or to Soracom Beam, Funnel, or Funk in order to forward the data to a server or a cloud service.

Since Binary Parser's conversion occurs after the data arrives at Soracom, cellular data usage can be reduced considerably.

Note: In order for Binary Parser to convert data, your device must be configured to send data to Unified Endpoint unified.soracom.io, or to the corresponding endpoint for Soracom Beam, Funnel, Funk, or Harvest. Data that is sent directly to a server or a cloud service will not be modified by Binary Parser.

MsgPack is available in more than 50 programming languages across many libraries, making it easy to implement in a wide variety of devices. For more information, refer to the official MessagePack site.

We have made architectural improvements to the User Console that reduces its loading time by about 50%. This improvement will take effect on January 13, 2022 and will be available for all users.

We will continue to strive to improve the user experience.

As of January 1, 2022, prices for the following Japan-only devices have been revised. Prices are in Japanese Yen (¥) and include Japanese consumption tax.

When uploading a WASM module on the Soralet management screen on the User Console, an error message too many soralet versions will be displayed if the number of uploaded WASM module versions has reached the Soralet limit. In order to continue uploading a new module, you had to cancel the upload, delete one of the old versions, and retry the upload again.

With this update, if you have already reached the Soralet limit for the number of WASM module versions, you can now delete the an older version without cancelling the upload: 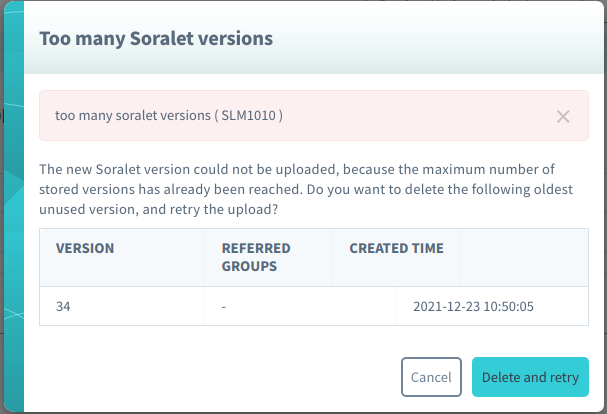 A "Delete and retry" button will now allow you to automatically delete the oldest unused module version and re-upload the new module.